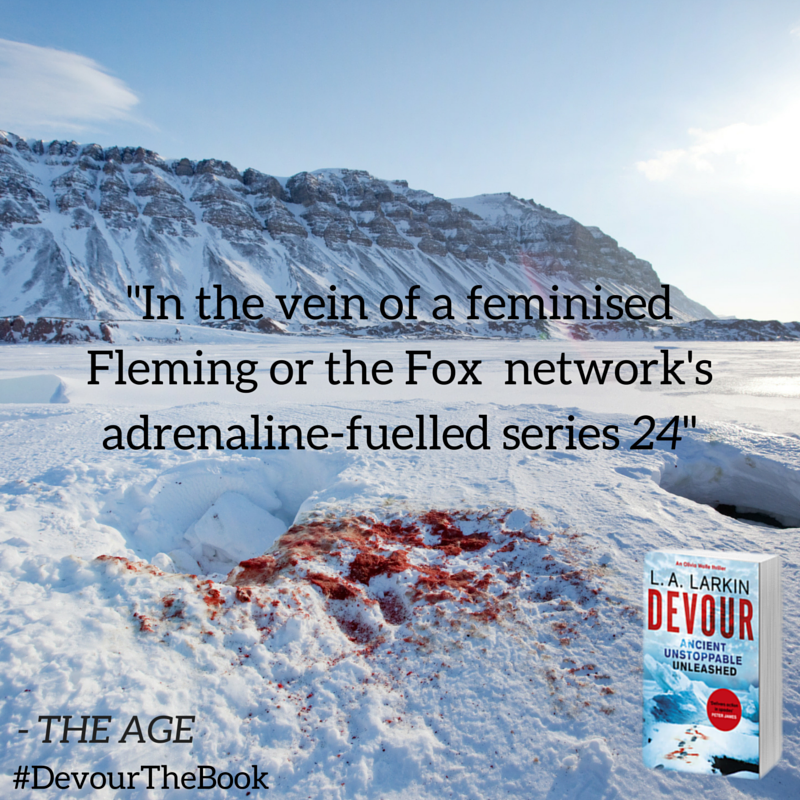 A feminised Fleming – review in The Age

I am over the moon  with the awesome review of Devour by Sue Turnbull in The Age on 15 July 2016. Feeling very proud! Link to article below!

Thanks so much, Julie, for giving DEVOUR five stars. Feeling very proud right now! Here is Julie's review on GoodReads: Reminiscent of the master of biological warfare in Michael Crichton and high adrenaline adventurist Matthew Reilly, Larkin's main character Wolfe finds herself in these worlds. Sent to the Antarctic to help out her boss, she is thrown into ...
> Read More 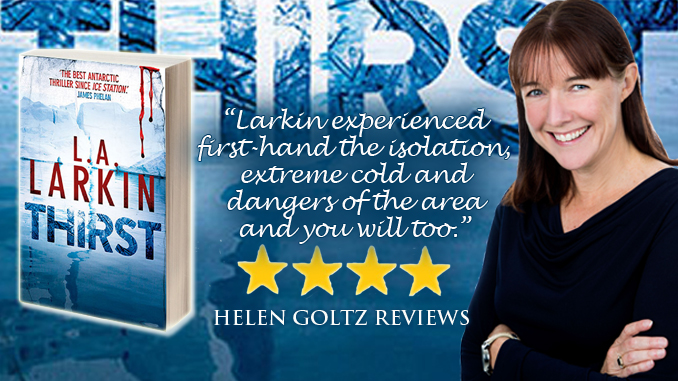 Helen Goltz Reviews has given 4 stars to THIRST over the Chrsitmas break. I am so proud this action-conspiracy thriller is still getting such lovely reviews.

‘Move over Matthew Reilly’s Scarecrow because Luke Searle is in town. I loved Reilly’s Scarecrow series and I was looking for a thriller that would keep me on the edge of my seat. I found it in Thirst. This is a fantastic read by L.A. Larkin.’

You can read more of the review here.

On March 24, 2014 I was busy writing an action scene for my next thriller. My central character had just witnessed the horrifying assassination of a young girl in Afghanistan, brave enough to speak out against a drug-trafficking warlord.
The phone rang and a senior editor at Reader’s Digest Australia informed me that my Antarctic thriller, Thirst, had been censored by their Chinese printers.
Thirst, published in 2012 by Murdoch Books, was part of a Reader’s Digest volume of condensed novels destined for distribution in Australia, New Zealand, Singapore, Malaysia and India. Not, I might add, in China.
China is where the books were being printed and the Chinese printers demanded that all references to Falun Gong be removed and that the word “torture”, as it related to a Falun Gong practitioner, had to be deleted. I was told the printers would accept the words “religious belief” instead of Falun Gong and “torment” instead of torture.
But, of course, these are not my words. Such changes distort my opinions and the context of my story. Through a third party commercial enterprise China was attempting to use Reader’s Digest to affect opinion on the touchy topic of Falun Gong outside its own borders by deleting it from my book.
I made the decision not to make the required edits and Thirst was dropped from the volume. The editor at Reader’s Digest sympathised with my decision and I recognised that she was caught between a rock and a hard place, with budget and time constraints.
So imagine my surprise when I read an article in The Sydney Morning Herald on April 2, 2014 by Nick Galvin in which the managing director of Reader’s Digest Australia, Walter Beyleveldt, flatly denied there had been any censorship.
I had assumed that in Australia, and other countries in which we are not arrested, tortured and imprisoned for having views that differ from our leaders, book publishers robustly resist censorship, especially extraterritorial censorship.
Is the profit motive so important (and printing in China so inexpensive) that Reader’s Digest effectively cedes editorial control to the printer?
They are not alone, of course. Bloomberg China was recently accused of repressing investigative reporting regarding corruption among the Chinese leadership for fear of damaging their business interests there.
Google suffered from years of battling China’s censorship laws and has been criticised for capitulating. But in both cases the product or the story was targeted at the Chinese market. My novel in the Reader’s Digest volume was not.
In our interconnected globalised world, in which publishers outsource to the cheapest provider, does this mean that China’s power to censor free speech, anywhere in the world, is far greater than we might imagine?
I never thought that as a fiction author I would find my work being censored. Nor, it seems, did Reader’s Digest. Their senior editor told me she only knew of it happening once before and that was for a non-fiction book by Sir Edmund Hillary that mentioned Tibet.
As a result of my experience, I now realise how important it is for writers, authors, their agents and publishers to be aware of the ramifications of printing in countries where freedom of speech is controlled. We owe it to our readers who want to know that the book they have just purchased reflects the opinion of the author and hasn’t been tampered with for political reasons.
What has happened to me demonstrates the insidious influence of globalisation and the triumph of commercial interests on freedom of speech. China is a cheap place to print, but it comes at a price.
As Tony Abbott’s trade delegation arrives in China next week I wonder if China’s human rights violations and ever-widening censorship powers will even be discussed.
As I return to writing my next novel, and think about the Afghani woman in my story who dies because she tries to tell the truth, I have to ask, what price freedom of speech?
L.A. Larkin is an Australian crime fiction and thriller author.
> Read More

Australian thriller novelist L.A. (Louisa) Larkin was working on her next novel on March 24, when the phone rang. On the line was a senior editor at Reader’s Digest, which was scheduled to print a condensed form of her last novel, “Thirst.”

The company that prints Reader’s Digest in China had stopped the presses, and demanded that Reader’s Digest remove references to Falun Gong and torture from Larkin’s work. Larkin was given two choices: censor her novel or lose the deal.
“I almost felt this was part of a story because it was so unexpected, and so unheard of,” Larkin said in a phone interview from her home in Sydney.
What was particularly concerning, she said, was that the edition being printed was not for China. It was for Reader’s Digest markets in Australia, New Zealand, Singapore, Malaysia, and India.
“This is about censoring extra-territoriality, and it is a way of controlling a world view of China, according to how China wants it to be,” Larkin said.
She refused to censor her work, and Reader’s Digest removed her novel from the edition.
A Reader’s Digest representative said it had no background on the issue. There was no immediate response from its Australia office.
Social Media Buzz
Twitter has been ablaze, however, with writers and authors around the world expressing their dismay.
Philip Patterson of Marjacq Scripts, Larkin’s agent, said authors have a clear reason for concern. He said in an email, “The implication for writers are that they then start asking their publisher or representatives, ‘Will my work be changed?’”
“I doubt any writer with an ounce of integrity would be a willing party to this,” Patterson said.
Larkin was told by Reader’s Digest it considered having the edition printed in Hong Kong instead, where it wouldn’t be subject to China’s censors. Doing so, however, would cost $30,000 more.
In the end, the $30,000 was more valuable to Reader’s Digest than preserving freedom of speech for its authors.
“What has happened here is that Reader’s Digest has used a Chinese printer, and they have pretty much told a very large American and international publisher what they can and cannot do, and I find that very worrying,” she said.
The mentions of Falun Gong and torture are only a small part of Larkin’s novel.
“Thirst,” which was published in 2012, is a thriller about a group of mercenaries who besiege a team of scientists at an Antarctic research station.
One of the characters trapped in the station is a Chinese-Australian named Wendy Woo. The character fled to Australia from China because her mother was arrested for practicing Falun Gong, and she later learned of the tortures her mother endured from Chinese authorities as a consequence of not renouncing her beliefs.
“If I submitted to China’s censorship and removed the references to Falun Gong, I’d feel I had betrayed my own beliefs, but also betrayed the character and her mother in the novel, and also what my readers expect of me,” Larkin said.
A Targeted Belief
Falun Gong is a traditional Chinese meditation practice that teaches adherents to live according to the principles of truthfulness, compassion, and tolerance. It has been violently persecuted by the Chinese Communist Party (CCP) since 1999.
Falun Gong is also among the five groups that have become the main focus of Chinese censors. The others are Tibetans, Uyghurs, Chinese democracy activists, and proponents of Taiwanese independence.
A 2013 report from Freedom House explains why the CCP focuses on these topics, stating, “These issues touch on some of the most egregious and systematic abuses taking place in China today, pointing to the CCP’s nervousness of regime violence being exposed, as well as the human costs of international silence.”
The report also warned that Chinese censors were trying to expand their censorship abroad—particularly on these topics. Cases range from the French satellite company Eutelsat cutting the signal of overseas Chinese television network New Tang Dynasty to “show a good gesture to the Chinese government,” to reports in November that Bloomberg News was self-censoring its articles to avoid angering Chinese authorities.
Larkin was told by Reader’s Digest that it had been pressured by China previously to censor a nonfiction work that mentioned Tibet.
She said, however, that the attempt to censor her work was the first she has heard of that applied to a work of fiction for distribution outside China’s borders—and she finds the implications deeply concerning.
Larkin said, “It shows the vulnerability to authors and publishers when they use a country where freedom of speech is not available.”
Additional reporting by Matthew Robertson.
> Read More
Page 10 of 23« First«...89101112...20...»Last »
Join the conversation @lalarkinauthor
Get L.A. Larkin’s latest news and images @LALarkinAuthor