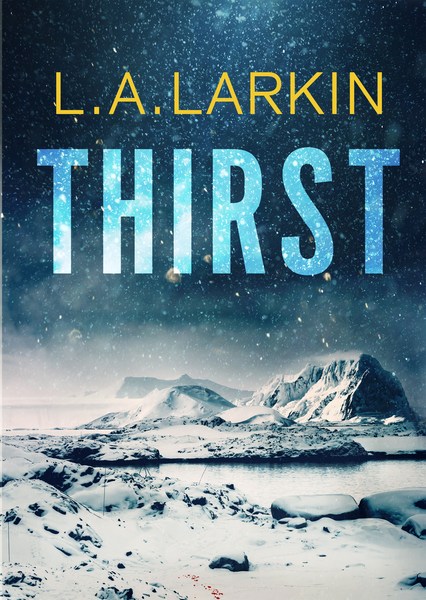 If you enjoyed my latest thriller, Devour, and you’re hankering for more Antarctic adventure, then  my previous novel, Thirst, has been relaunched by my UK publisher, Constable, in ebook format, with a stunning new cover. It’s available online, including from Amazon.com and Booktopia. Thirst is set on Antarctica’s Pine Island Glacier, and is about a maverick glaciologist, Luke Searle, and his battle to stay alive when armed mercenaries attack his research station. But there is something even bigger than Luke’s survival at stake. What are the killers doing there? What catastrophe are they about to unleash?

Vitaly Yushkov, the Russian who plays a key supporting role in Devour, plays a smaller but important role in Thirst too. So if you are a fan of this mysterious character and want to learn more about him, then Thirst offers some further insight into the man, long before he has met Olivia Wolfe.

Here is an extract from the opening chapter of Thirst. Enjoy!

At minus thirty degrees Celsius, the trickle of blood on Mac’s beard
froze rapidly.
‘Wh – what do you want?’ he stammered, spreadeagled on
his back.
His masked attacker didn’t respond. In the struggle, Mac’s
prescription goggles had been torn off, so the man pointing an
assault rifle at him was a terrifying blur.
Minutes earlier, Mac had been helping Dave to remove fragile
scientific equipment from the camp’s red, domed pods, known as
‘apples’. The Walgreen Crevasse project was complete and they
were shutting down camp for the winter. The snowmobiles were
loaded up, and Mac, chilled by the winds, had started swinging
his arms and stamping his feet. His initial excitement at swapping
shifts with Luke – the project’s glaciologist – had waned as the
intense cold clawed at his bones.
Now his heart was racing and sweat trickled down the back
of his neck. His ribs had been broken by a savage blow from a rifle
butt and every breath was torture. A few metres away, near the
crevasse edge, Dave lay with his arms raised, two guns trained on
him. The last of the four strangers was unarmed and watched from
a distance. He was the leader – it was clear from the way the others
deferred to him.
‘Who are you?’ Mac asked, dumbfounded. There were no other
field sites for at least a thousand kilometres, and he knew the nearest
station, Li Bai, was currently unmanned.
Still no response. Had they heard him above the katabatic winds
that hissed down the mountain and across the glacier, blowing
stinging spindrift into his face?
The leader moved closer. As he bent over Mac, some of his
features came into focus. He rolled his balaclava up and away from
his mouth, revealing thin lips and sparse black hairs on his boyish
chin. ‘Did you report our presence here?’
His voice was surprisingly deep. Authoritative. Some kind of
accent … American?
Before Mac could answer, his interrogator gestured to the
nearest subordinate, who kicked him in the kidneys. Mac convulsed,
vomiting bile.
‘Answer. Did you radio your station?’ the man yelled like
a drill sergeant.
Panting, and with his eyes now watering, Mac could barely
make out the black blobs of his shattered two-way radio on the
ground. They hadn’t had time to call for help. Dressed in white, the
strangers had been virtually invisible. When they appeared out of
nowhere, Mac and Dave had simply gawped. In Antarctica, there
was no reason to assume strangers were anything but friendly, part
of the international research fraternity. And they never expected
visitors to be armed.
‘Yes,’ said Mac, hoping his lie would be believed.